In November, UMIO’s Carmen Vonken and Dominique Meyers taught an elective course about Design Thinking and Innovation at the University of Stellenbosch Business School. We spoke to them about their experiences in South Africa.

Design Thinking is a method for solving problems or developing new products and services in a practical and creative way. “It is a user-centered discipline that is very practical and pragmatic”, Carmen Vonken explains.

During the Elective Week of the Executive MBA programme at University of Stellenbosch Business School, the students had to go through a so-called design sprint. Carmen: “This is a process in which you work from a challenge to a solution within a fixed time frame. The students worked in groups on a fictional case that they could fill in themselves. The starting point had to be a challenge for a company near the university, for example a shop or a restaurant. Part of the design sprint is the development of a customer journey. This is the path a consumer follows before, during and after purchasing a certain product or service. Many students indicated in advance that this was nothing new, that they already knew everything about customer journeys. However, immediately after the session they discovered that they had never worked out a real customer journey and that much more is possible than they knew from the books. That was an eye opener for them.”

Every three years, UMIO welcomes Executive MBA students from the University of Stellenbosch Business School for a European Management Residency. The residency is part of a fruitful and ongoing partnership between Maastricht University’s School of Business and Economics and University of Stellenbosch Business School. For the July 2018 residency, the content of the programme was adjusted; the focus was shifted from EU Business Themes to Design Thinking and Innovation.

The week in Maastricht turned out to be a great success with many positive reactions from students. “During the residency, professor Marlize Terblanche-Smit concluded that her business school was in structural need of more depth in the field of Design Thinking”, says Dominique Meyers. “I then suggested devoting an elective to this topic for the Elective Week of their Executive MBA programme. At the end of 2018, we received a request to prepare a proposal for the Elective Week of 2019. The continuation of the elective depended on the interest of the students. Ultimately, no fewer than 26 students chose our elective, which meant that Carmen and I could travel to Cape Town in November.”

The elective about Design Thinking and Innovation was a great success, with both trainers receiving many positive reactions from the students. Dominique: “It was a bit exciting in advance, since it was the first time that we taught this elective abroad. In addition, we were warned that South African students usually first see which way the wind blows. That also appeared to be the case during the first day; many students were enthusiastic but also critical. On the second day, they came loose. We had apparently shown that we knew what we were talking about. The atmosphere became more relaxed and we laughed a lot. The students asked many questions, they were also constantly busy with the question: what does this mean for my business? That was very inspiring to see.”

“What the students really appreciated is that we, as teachers, have a good command of the knowledge and the material because we implement it within the business community through our projects”, says Carmen. “This allows us to quote many examples of what we have experienced ourselves and what we hear from companies. They also appreciated the interactivity of the elective. They found it useful to be able to apply the theory to their own case. That was a nice change from the theoretical methods that they normally deal with within the MBA programme.”

In principle, the elective was a one-off assignment, but given the positive reactions from the students and professor Terblanche-Smit, Carmen and Dominique expect that they will also be able to submit a proposal for the 2020 Elective Week. “The official feedback has yet to come in”, says Dominique. “With bad evaluations we would no longer receive an invitation, but the feedback in class was very positive so we do not expect that at all.” 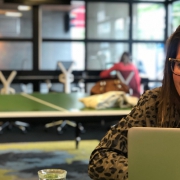 UMind takes Problem Based Learning to the next level

How will technological innovations affect the job market over the next few years?